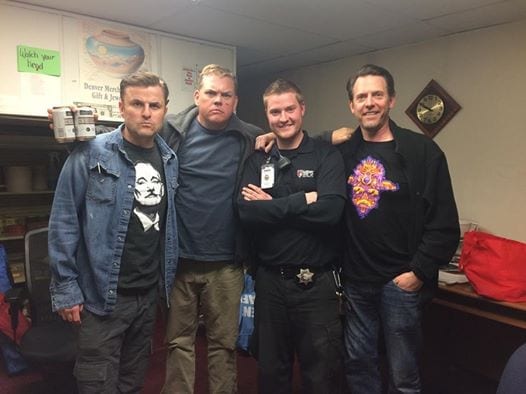 This is the second year in a row that MPS has been selected as the prime security contractor for the marijuana industry’s pre-eminent events: The 2015 BIG Industry Show & High Times Cannabis Cup. At MPSS we relish the opportunity to be the industry leader and our work speaks for itself!

This years call to duty ferreted out quite a few more quality security officers of the caliber that makes MPS stand out among its competition. We had former Navy Seals, students, and a few professionals looking to pick up some extra scratch. From all those we employed for the event, we keep a directory and keep tabs on those we’d like to place in upcoming contracts. We also started advertising back in February to make sure we could fill the week-long schedule. We also knew to higher more event staff than our schedule permitted; because theres always going to be a no-show or someone call in sick, or some such thing. It takes months of planning and preparation to get a security team this size ready for a great unknown task.

Imagine an event best described as organized chaos, and you pretty much have our week-long trade shows event summed up. The beginning of the week starts out relatively tame with the B2B BIG Industry Show, which pretty much pairs buyers with vendors of all cannabis related wares, like glass, horticulture, lighting, vaping pens, hemp clothing, and anything that deals with cannabis. Some of the same vendors that do the BIG Industry Show stick around and display at the Cannabis Cup as well. The Cannabis Cup is sort of like a Rainbow Family gathering that starts slithering into a line that wraps around the block and doesn’t stop forming. Promoters for the Cannabis Cup this year anticipated 50,000 attendees each day, but at times it looked and felt more like 100,000 in attendance. Once inside, it’s more like a modern techno-rave with music pounding day-in-and-out. Oh, and the constant smell of burning cannabis wafting everywhere is inescapable. It’s pretty easy to discern from the faces of those attending it’s as close to heaven on Earth as they’ll get, while others who have the dubious task of working it in some capacity or other would consider it closer akin to hades.

Let’s be honest, there’s just going to be mishaps at any event involving more than 30,000 attendees. With a crowd that big something is bound to happen. During the BIG Industry Show the most memorable Chaos Award goes to the still anonymous person, who pulled the fire alarm off the wall in the women’s restroom, causing all of the shows vendors to egress out of the nearest exit until given the all clear signal. During the Cannabis Cup, I’d say the Chaos Award went out the first day when I learned that 18 people had already passed out from excessive cannabis intake. I’m quite certain the number of people found lying on the ground in a stupor, due to shatter, dabs, or wax was way down from last year. Obviously, the city helped out by not allowing any Colorado companies to offer free samples, like they did the previous year. Only out-of-state vendors were allowed to provide attendees with any kind of marijuana sampling.

If there was one constant that pervaded the entire week-long cannabis festivity it would be everyone was in the Always Be Closing the deal mode! Whether it was the wholesale vendors sealing a deal with local buyers at the BIG Industry Show, a security company working on closing a partnership with another industry leader, or dispensaries pitching their favorite strains entered for a coveted cup to would be voters.

The Small World of Celebrities

Each year sees a new cadre of celebrities running around the week leading up to 4/20. Last year, the big names of those sighted by our security officers included Cheech & Chong, Henry Rollins, Peter Dante, and Ice Cube. This year saw no let up on the famous in town or in attendance at the trades show with the likes of rapper Fat Joe, Tommy Chong, Snoop Dog, and our teams favorite Broken Lizards Kevin Heffernan, Steve Lemme, and Erik Stolhanske. Our Denver Mart Security Supervisor Sean Daley even had the privilege of providing executive protection for Broken Lizard. They spent about an hour in our security office asking me all kinds of questions, Daley said. They were really down to Earth.

One thing that history teaches from performing in your first rodeo is you learn plenty of lessons the first time around. MPS had a lot of lessons learned from doing these two industry titan trades shows and put the knowledge of pulling them off to work on mastering them the second year, and each subsequent year thereafter. Â We set the bar higher and set expectations for our crew high, and they didnâ€™t let us down. We wanted people we could trust to not partake of product. We wanted people that could work long shifts surrounded by crazed partiers. And, we wanted people who were professional, yet pleasant.

The Results and Testimonies Are In

No other security firm could have pulled this off the way MPS did, said one of the industry vendors at the end of the tradeshow. Likewise, Denver Mart CEO and Owner John Doyle said, You guys did a great job this year, and (Supervisor) Sean Daley is to be commended for an exceptional job scheduling and overseeing it all.